The Passenger by Alexandra Bracken review 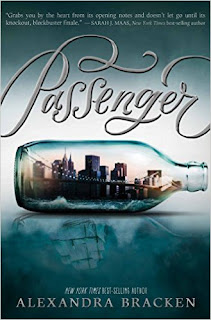 Synopsis:
In one devastating night, violin prodigy Etta Spencer loses everything she knows and loves. Thrust into an unfamiliar world by a stranger with a dangerous agenda, Etta is certain of only one thing: she has traveled not just miles, but years from home. And she's inherited a legacy she knows nothing about from a family whose existence she's never heard of. Until now.

Nicholas Carter is content with his life at sea, free from the Ironwoods-a powerful family in the Colonies-and the servitude he's known at their hands. But with the arrival of an unusual passenger on his ship comes the insistent pull of the past that he can't escape and the family that won't let him go so easily. Now the Ironwoods are searching for a stolen object of untold value, one they believe only Etta, his passenger, can find. In order to protect her, Nick must ensure she brings it back to them-whether she wants to or not.
Together, Etta and Nicholas embark on a perilous journey across centuries and continents, piecing together clues left behind by the traveler who will do anything to keep the object out of the Ironwoods' grasp. But as they get closer to the truth of their search, and the deadly game the Ironwoods are playing, treacherous forces threaten to separate Etta not only from Nicholas but from her path home forever.

My thoughts:
I loved this book and the cliffhanger was typical Alexandra Bracken and I can not wait for the 2nd book to come out.
Posted by Shelleen at 12:47 PM No comments: 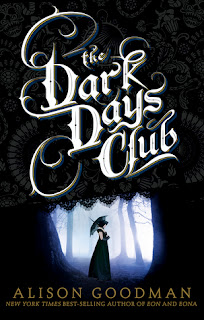 Synopsis:
London, 1812. Eighteen-year-old Lady Helen Wrexhall is on the eve of her debut presentation at the royal court of George III. Her life should revolve around gowns, dancing, and securing a suitable marriage. Instead, when one of her family’s maids disappears, she is drawn into the shadows of Regency London.
There, she meets Lord Carlston, one of the few able to stop the perpetrators: a cabal of demons that has infiltrated all levels of society. Carlston is not a man she should be anywhere near, especially with the taint of scandal that surrounds him. Yet he offers her help and the possibility of finally discovering the truth about the mysterious deaths of her parents.
Soon the two of them are investigating a terrifying conspiracy that threatens to plunge the newly Enlightened world back into darkness. But can Helen trust a man whose own life is built on lies? And does she have the strength to face the dangers of this hidden world and her family’s legacy?
Set in the glittering social world of the Regency upper-crust, the Dark Days Club is a supernatural adventure that introduces New York Times best-selling author Alison Goodman’s Lady Helen Wrexhall—another heroine whom, like Eona, readers can take to their hearts.
My thoughts:
You never know who to trust and not trust in this book. I loved this book. I couldn't put it down. Helen is being raised by her aunt and uncle and I can not stand her uncle. He is the type that just waits for her to do one little thing wrong. I can't wait for the next book.
Posted by Shelleen at 12:42 PM No comments: