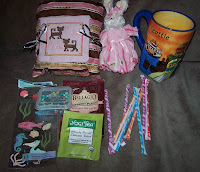 I received my freebie exchange from Laura. We thought it was lost in the mail and then i found out she had sent it UPS weeks ago. Then I remembered that there was a UPS box on my porch but I thought it was the one that DHs cell phone came in. Boy do I feel like an idiot. I love the pillow that she finished with the pocket in the back and all of the little goodies. Thank you for a wonderful exchange.
Posted by Shelleen at 8:38 PM 6 comments:

Lets see how well I did in May:

Movies:
Alvin & The Chipmunks
Fantastic 4 Rise of The Silver Surfer
Underdog
The Insatiable
The Orphanage
Secrets of The Summer House - Lifetime
The Memory Keepers Daughter - Lifetime
Knocked Up
Nightmare at the end of the Hall - Lifetime
The Tenth Circle - Lifetime 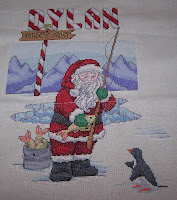 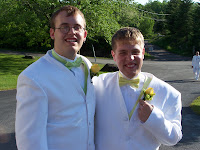 I have been stitching a lot in the month of May. I finished 2 cards by M Designs from the MB class that I took. I stitched up my monthly JCS ornament from the 1998 issue. The design is Mosey 'n Me's A Gift For a friend. There is supposed to be a little white bird button on the snowman's nose but I don't have any bird buttons in the house so I will have to pick one up sometime.
I also got quite a bit stitched on Fishing Santa Stocking. I am almost done with it.
Also is a pic of Justin's prom pic. They had a blast. He asked to use my car for the night and he was home by 11:30 as he did not want to go to parties as some had alcohol there. Smart kid. Justin is the one with the glasses on.

While stitching during the week I watched a bunch of movies.
The Waterhorse - Legend of the Deep
Umited 93
Disturbia
Stay Alive
X-Men :The Last Stand
Juno
The Secrets of The Summerhouse - Lifetime movie

I also finished an audiobook: Circle of Quilters by Jennifer Chiaverini and I started another one by her called The Quilters Homecoming.

I won't be stitching much this month. Justin graduates on the 29th and I STILL have to put together his scrapbook. So I am finishing a square for a RR and then working on the scrapbook as much as possible. I will try to post pics of the pages.

I picked up a magazine. Cross Country Stitching June 2008. After reading on Becky's blog about the S is for Stitcher Sampler. I had to see the magazine in person and fell in love with this sampler and ,Peace,Love,Joy & Life Quilt Sampler and , Bee Kind , Bee True ABCs. So Does anyone want to do any SALs with me in the future. I want to do S is for Stitcher in the fall. The Peace Love and Joy in the winter and do Bee Kind in the spring. Just email me if interested.
Posted by Shelleen at 10:40 PM 3 comments: