I belong to a facebook group called Shadow Lounge Monthly Readathon  and we read from Friday night through Sunday night. So I pulled out my tablet as I have a bunch of eArcs on it from NetGalley. I finished The Crooked Staircase by Dean Koontz .

I gave this a 3 star.
It gets published on May 8th.
My thoughts:
Jane Hawk knows she may be living on borrowed time. But as long as she's breathing, she'll never cease her one-woman war against the terrifying conspiracy that threatens the freedom--and free will--of millions. Battling the strange epidemic of murder-suicides that claimed Jane's husband, and is escalating across the country, has made the rogue FBI agent a wanted fugitive, relentlessly hunted not only by the government but by the secret cabal behind the plot. Deploying every resource their malign nexus of power and technology commands, Jane's enemies are determined to see her dead . . . or make her wish she was.Jane has a son who she is keeping safe with people. As she goes on this hunt to rid the world of these bad people. It was fast paced and intriguing. I kept cheering her on and hoping something would happen to the bad people. Then it ended for the next book lol. I received this from NetGalley for a review.

Then I started and finished a book from the library The Wife by Alafair Burke. 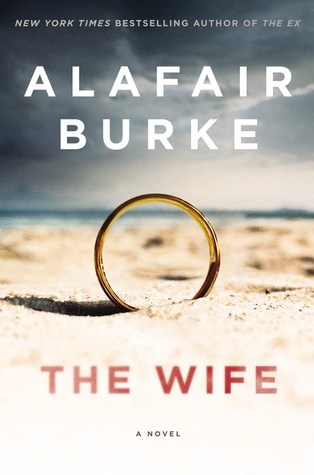 I rated this a 4 star.
My thoughts:
When Angela met Jason Powell while catering a dinner party in East Hampton, she assumed their romance would be a short-lived fling, like so many relationships between locals and summer visitors.But they ended up getting married. Angela had a past she didn't want people to know about so she thought it would be perfect to move away to be with Jason. After 6 years Jason had become a small celebrity. Then 2 women come forward with sexual allegations. Then one of the women disappears and Angela takes a look at the man she married and what she doesn't know about him. She is afraid that old secrets will resurface.This book had me from the beginning and I did not see some of the ending coming. Very good book.
You can buy it on Amazon The Wife

Then I started and finished Behind Her Eyes by Sarah Pinborough.

I gave this 4 stars and you can buy the book on Amazon Behind Her Eyes
My Thoughts:
Louise is a single mom, a secretary, stuck in a modern-day rut. On a rare night out, she meets a man in a bar and sparks fly. Though he leaves after they kiss, she’s thrilled she finally connected with someone.Then Louise goes to work on Monday and finds out he is the new doctor where she works. The Very married man she met. Then she bumps into Adele, who wants to be friends but who is also David's wife. As she gets close to both of them she begins to question things in their marriage. And as things unravel she is caught in the crossfires of what she has no idea.This book kept me on the edge of my seat. Just when I thought I had an idea of what happened, the end just throws you for a curveball. I loved this book!!!

This morning I also colored on a Sherri Baldy pic for St Patrick's Day. I didn't finish it.
Tonight is Live chat in my Facebook Group Color With Shelleen and Friends  and we always have fun.

For those who don't know. I babysit my 2 grandon's while their parents work. Amber had lost her job last week but she has 2 job interviews tomorrow so it looks like I will be busy babysitting tomorrow. I had just planned on going grocery shopping tomorrow so now that will have to wait.

Let me know what you are reading or what other hobbies you have.
Posted by Shelleen at 5:56 PM 2 comments:

Does anyone read my blog?

Thinking about posting daily. What I am reading and coloring. I do still cross stitch once in awhile but I really would like to get this blog going again. Even if only posting once a week. I read books from my physical shelf, the library, my e books and what I get for review. I normally only do reviews on Goodreads but would like to do them here as well. Also to share what I am coloring as I do have  a You Tube channel dedicated to all of this but sometimes I think this would be a great platform for me as well to open back up. Just some thoughts I have.
Posted by Shelleen at 5:20 PM 6 comments: