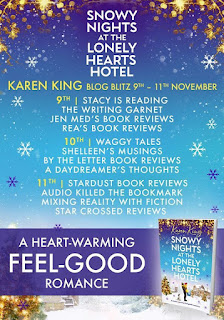 Book Description:
Snowy rooftops, mulled wine, and a hot single dad. Not the Christmas Saffy wished for… but maybe the one she needs?
Twenty-nine-year-old Saffron Baxter knew her fun holiday plans didn’t stand a chance the moment her sister called to say she was stuck abroad with no hope of being home before Christmas. Saffy would just have to abandon thoughts of wild festive parties in the city and head down to remote Cornwall.
Because every year her sister hosts a huge Christmas meal for all the single parents in her village. And Saffy knows it’d break her heart to let them down.
Arriving as snow starts to fall over the thatched cottages of the little harbour town of Port Breok, she meets Logan – the tall, fair-haired, blue-eyed, devoted single dad who lives over the road, with his adorable daughter Chloe. At first she thinks he might help her make Christmas Day extra-memorable, but he just seems convinced she’ll never manage – that she’s just a party girl who doesn’t care about family, or anyone’s feelings.
Maybe he’s right. After all – she doesn’t want to settle down, she’s only there for a few days… But she’s still determined to do her sister proud with gorgeous decorations, the most beautiful real tree – complete with extra twinkly lights, and delicious mince pies. To make it a Christmas everyone will remember, especially little Chloe. Even if, when the mistletoe comes down, she knows she’ll probably never see Logan again…
The perfect festive romance novel, ideal for fans of Nora Roberts, Jenny Hale and Debbie Macomber.
Amazon https://amzn.to/2T1pU7d

My thoughts:
Saffy's sister calls her and asks if Saffy can take over The Christmas Party that Hannah and her husband have every year for the single parents in the area. Hannah and her husband along with their twins were away when the kids became ill. Then they couldn't make it home when they wanted to because of the weather. But her neighbor Logan will help Saffy, all she has to do is ask. Logan had heard so much about Saffy from her sister that he doesn't have much use for her. He is raising his daughter on his own since her mom left her when she was a baby. So Logan sees Saffry as a career minded woman and no time for anyone. As that is going on Saffy's best friends had split up and one of them came to help her get ready for the Christmas party.
I loved getting to know Logan and his daughter Chloe. While reading this you knew that there would be a connection between Logan and Saffy but they both fight their feelings. Will they finally tell each other how they feel and will Saffy now find time to spend with her family? Time will only tell.