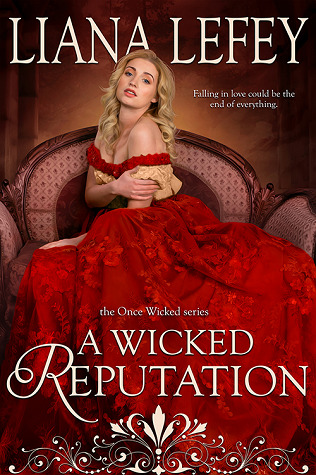 Betrayed by her fiancé and her best friend, Lady Diana Haversham's reputation is left in ruins, and she is unjustly cast out by her family. Left with little choice, she agrees to pretend to be a courtesan to protect her benefactor's secret. What she didn't count on was meeting temptation in the form of one Lord Lucas Blackthorn.
Lucas is fascinated by the shameless Diana, whom his friends claim is his perfect counterpart. He can't stop thinking about her sultry smile and captivating eyes, but what draws him most is the sharp mind she reveals—and the certainty she's hiding something.
When Lucas learns the scandalous truth, Diana will have to make a life-and-death choice.

A Wicked Reputation by Liana LeFey


My rating: 4 of 5 stars
Lady Diana's reputation is tarnished when her fiance ran away with her best friend and got married. He told everyone that Diana had gotten pregnant by some other man. Since this is set in the 1800s then having sex outside of marriage is a sin and no man will want to marry a woman who is soiled. She was living with her uncle and aunt at the time. Her uncle threw her out of the house and would not believe her. Left with little choice, she agrees to pretend to be a courtesan to protect her benefactor's secret.
Lucas meets Diana and wants her. He will do whatever it takes to have her. But what he finds out even surprises him.
I loved the friendship between Diana, Harrow and Rene and Harrow's wife.
I still found it a little hard with everyone that is hired help that some things weren't leaked about all their friendships. I did not realize this was book 3 of a series and do not think I missed anything by not reading the other 2 books.
I received this from Entangled for a review.

Buy the book on Amazon https://amzn.to/2SuXSzs